BP and ConocoPhillips announced today that they have combined resources to start work on Denali, the Alaska gas pipeline. The pipeline will move approximately four billion cubic feet of natural gas per day to markets, and will be the largest private sector construction project ever built in North America. The volume of gas to be transferred would account for 8 per cent of the US daily consumption.

The joint operation combines the financial strength, arctic experience and technical resources of two of the most capable and experienced oil and gas exploration and refining companies in the world. 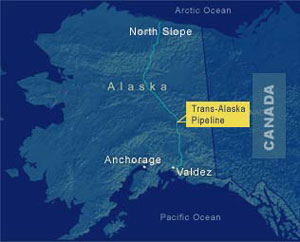 This announcement would come as a blow to TransCanada Corp., which had earlier emerged the frontrunner to bring untapped Alaskan gas to the market. The company already has a massive gas pipeline network in Alberta, but with Western Canadian supply declining, the company needs to seek out new frontier opportunities, such as Arctic gas.

Alaska has always been a source of encouragement as well as consternation for the world's major energy companies. While they always knew that the distant American state holds prodigious amounts of natural gas – an estimated 35 trillion cubic feet – plans for exploitation have been held up due to cost and regulatory constraints.

An earlier pipeline proposal by BP, ConocoPhillips and Exxon was quashed by Alaska's legislature in 2006.

It was only last year that Alaskan Governor Sarah Palin introduced new legislation to restart the process, soliciting bids from interested companies. In January, she said TransCanada's pipeline plan would be the only proposal officially considered by the state, which is expected to decide whether to grant a licence later this year. At the same time, the legislation effectively left the door open to shippers to propose rival pipelines – such as the one now put forward by BP and ConocoPhillips.