The Geneva International Motor Show continues to be one of the favourite events of the auto industry with over 100 years of history behind it. Whatever one sees in cars, and whatever the automotive needs and wants are, can be found at the Geneva Motor Show. 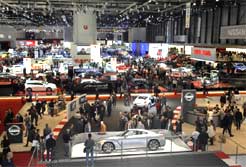 Annually held in March, at Palexpo, a giant convention centre at Geneva, the show has seen almost all combustion model automobiles through their evolution, ranging from benzene to steam, with many exotic and super cars stealing the spotlights throughout the 20th century.

Of course, other major international motor shows offer a similar display of four-wheeled diversity and never-seen models, but it's only at the Palexpo that cars take priority over everything else. Carmakers regard the Geneva show as the most prestigious and level playing field for showing off their products because Switzerland lacks its own auto industry.

The 2008 show, held this year from 6 March to 16 March, was no different with a plethora of cars at display from small, light, prototypes and efficient city vehicles to massively powerful super cars all under one roof.

In anticipation of stricter European emissions controls, this year's show has seen more environmentally friendly cars with major manufacturer displaying hybrid versions that use electricity or hydrogen in addition to conventional fuels.

Other factors such as rising oil prices, congested cities and growing concern at the environmental impact of motor vehicles has made way for a host of small cars, which made their debut in Geneva, raging from unimaginable extravagance to the world's cheapest new car.