The new $72,500-Ducati Desmosedici RR is in a category of its own. The bike with its race-oriented features looks all set for the MotoGP series and just about looks out of place on the street. 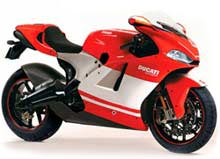 The Ducati Desmosedici RR (Racing Replica) is a road replica of the Desmosedici GP6 MotoGP machine, which Loris Capirossi and Sete Gibernau rode in the 2006 Grand Prix motorcycle championship. The bike is the first-ever street motorcycle to offer a wealth of performance and technology of a racing bike, courtesy Ducati's experience in MotoGP.

The RR was launched at the 2006 Italian MotoGP event at Mugello. The company decided to make only 1,500 limited edition motorcycles with production scheduled for October 2007 and the first customer orders commenced this January 2008, with Hollywood superstar, Tom Cruise receiving the first RR motorcycle.

The company has introduced a new dedicated service plan for this limited edition bike. Each Ducati Desmosedici RR comes with three-year warranty and scheduled maintenance, free of charge for three years. The exclusive RR owners will also receive a special race kit that includes a 102-decibel racing exhaust, a dedicated CPU, bike cover and paddock stand.

The red-and-white superbike's body is made from titanium, magnesium and carbon fibre technology. The powerful four-cylinder Desmodromic engine built by the Borgo Panigale factory engineers makes the Desmosedici RR the ultimate and the most extreme MotoGP racing machine today.

Alan Jenkins was the man behind the aerodynamics package of the RR, aimed at achieving maximum speed and excellent handling. Jenkins also worked on the colour scheme of the bike. The new lightweight multifunction dashboard is a replica of the Desmosedici GP7 racing machine, which has been designed in collaboration with Ducati Corse.