Gliding smoothly at 180km per litre of petrol

A petrol engine four-wheeler with a mileage of almost 200 km per litre? The claim may sound incredulous, but that is precisely what a group of Bangalore college students have accomplished. 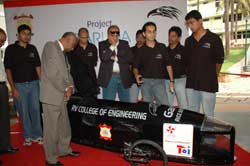 The students of the mechanical engineering department of Rashtriya Vidyalalya College of Engineering have designed and built a super fuel-efficient car which they claim addresses issues such as oil crisis, environmental pollution and need for green technologies. This is their first step towards eventual participation in the SAE Supermileage International Competition in the US and Shell Eco-Marathon, in the UK. Akhila Thyli Hemanth chats with their team leader Nishant Sarawgi

Working on this project for nearly two and a half years, with a social life that hit zero, the entire team devoted all its waking hours into this project. But Sarawgi asserts that the end result has been worth every moment of their efort.

Coming from a Rajasthani family, Nishant was born and brought up in Guwahati, Assam, before coming to Bangalore to complete his high school at Bishop Cotton Boys School. His childhood passion for automobiles and machines led him to opt for mechanical engineering at RVCE. The idea of developing a super efficient car began to take roots when Sarawgi, always keen to do something different, wanted to start a project that would give the team an opportunity to apply classroom lectures into something practical that would enable them to interact with industry experts.

Soon, he started looking for other students like himself and formed a well-structured team comprising of Kayaan, Darshan, Bharat, Jacob, Krishna, Gautham and Rakshit. Work was delegated to each one of them and their roles defined according to their skill sets after trying to gauge who had the knack and skill for a particular job ranging from the technical to public relations and sponsorship.