Airbus to cut back on A380 deliveries

Airbus SAS, the world's largest commercial-aircraft maker,  has scaled back its delivery schedule for the A380 super jumbo as airlines resist accepting large planes when demand for air travel is depressed by the global recession. 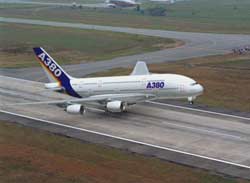 Airbus said that it had cut its planned production of A380s this year to 14 planes from 18. "Customers approached us and we are adapting our schedule to their needs," said Airbus spokesman Stefan Schaffrath.

As recently as mid-March, Airbus had said it expected to deliver 18 A380s this year. The cut is linked to previously announced delivery deferrals at Australia's Qantas Airways Ltd. Air France and India's Kingfisher Airlines Ltd have also deferred their A380 purchases.

Airbus, a unit of European Aeronautic Defence and Space Co, said in a statement that the reduction will have "no significant impact on EBIT," or earnings before interest and taxes this year. Airbus said it "will take mitigating actions against the negative effects" of the shift on free cash flow.

Airbus said it plans to deliver "more than 20" super jumbos next year. This is its first recent announcement of a delivery target for A380s next year. The A380, the world's largest passenger plane, carries a catalogue price of $327 million, but early customers received significant discounts, airline officials have said.

Global international airline traffic fell 11 percent in March, accelerating a decline that began in September, the International Air Transport Association said 28 April. The outbreak of swine flu, which began in late April, has worsened the short-term forecast for air travel. Production of the A380 is already running two years late because of problems with installing wiring.