Paris: In step with prevailing trends across the aerospace industry it has now been announced that first deliveries of the Airbus 400M military transport aircraft will start at least one year later than initially planned. A senior official in charge of European arms procurement affairs said Monday the setback has been necessitated because of a delay in engine tests.

Patrick Bellouard, director of the Organization for Joint Armament Cooperation en matičre d'Armement (OCCAR)-EA, told  French media that as the first engine test had been postponed until October, the maiden test flight of the military transport aircraft was expected to conducted only by the end of this year. 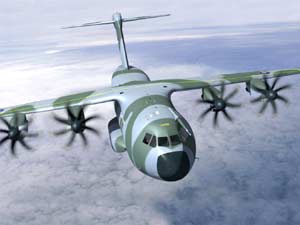 This was previously scheduled for July 2008. The first deliveries, Bellouard said, would now be pushed back to the end of 2010. Under terms of contract, the first A400M was to be delivered to the French air force in October 2009.

Last October it was announced that the company would postpone A400M's first test flight to the July 2008 due to a time lag in the development of the TP400 turboprop engines.

Bellouard said that the European Aeronautic Defense and Space Company (EADS), the parent company of Airbus, would be fined for the delay, but denied German media reports that EADS had threatened to abandon the A400M programme if it was penalised.

EADS has never conducted this kind of "blackmail", Bellouard said.