After achieving a breakthrough in the South American market, with sales of seven Dhruv Advanced Light Helicopters (ALH) to the Ecuadorian Air Force, Indian aerospace and defence giant Hindustan Aeronautics Ltd (HAL) has announced that it has made another successful bid for the supply of three Dhruv's to Turkey, in a contract estimated be worth around $ 20 million. 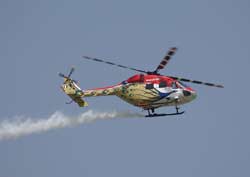 This becomes HAL's second successful international bid, won in the face of stiff competition from global players. HAL finalised the contract over the weekend.

The announcement comes just weeks after making a successful $50 million sales to the Ecuadorian Air Force for seven of these helicopters. Earlier, HAL had missed out narrowly on finalising a contract with the Chilean Air Force for the supply of 12 of these machines, after American competitor Bell reportedly used political influence to seize the contract for its 412 series helicopters.

At that time this had looked very likely to become HAL's first contract from the South American continent.

According to HAL chairman, Ashok Baweja, an Indian delegation in Turkey finalised the deal over the weekend. The three machines will be supplied over a period of six months.

Baweja also informed the media that the order was only the first lot and that he expected further orders to emerge. Reports suggest that Turkey may be in the market for another 17 of this class of helicopters over the next few years. The total cost of such a deal would be close to $150 million.

What makes the feat more creditable for HAL is the fact that Bell was in the fray this time around as well and Turkey has always shown a preference for US made defence products.

After setbacks with Chile and Malaysia, where it too lost out for unknown reasons, HAL now appears to be making its presence felt in the international market.