Airbus Industrie, the manufacturer of the A380 superjumbo, plans to make greener planes powered by the new 'step change' technology before 2020, as it seeks to produce more fuel-efficient aircraft. 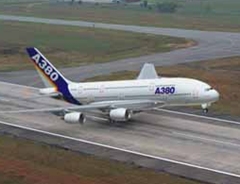 Airbus said it would power its new planes by ''emerging technology" as the high oil price becomes a bigger driver for change.

"What we are looking for and what the airlines are looking for is a step-change in terms of aircraft technology. The aircraft should be ready to go into service by the end of the next decade," Tom Enders, Airbus chief executive, said.

Developing new aircraft models, however, is no easy task and planes that use ''step-change'' systems are likely to be approached with caution by safety-obsessed manufacturers and customers.

Scott Carson, chief executive of arch-rival Boeing, said the current dip in the airline market would affect aircraft orders in the short-term, but with production lines overbooked for years ahead, it will give the company more breathing space.

"We recognise that there is going to be some effect on the total order book," he said.